What we did on our Winter Vacation

Well, here we are in 2011.  It looks good doesn’t it.  You want to jump right in to this new year and put all of that old 2010 stuff behind you.  Sounds fine to us.  But before we talk about what the future holds for Tezeta Band, please indulge us as we let you know what we have been up to for the past two months.

1. We rocked the final night at Berbati’s Pan

On New Year’s Eve we resurrected our alter-ego, The Five Fingers of Funk and played the last show ever at Came Berbati’s Pan.  It was an epic and emotional night that was also a tribute to our dear friend the late Ted Papaioannou who co-founded Berbati’s Pan 16 years ago.   On this bitterly cold evening Pete Miser and DJ Chill rocked the mics like never before, Tim Cook wholesale nba jerseys played a ferocious Hammond solo, Talbott’s beats were extra booming, , the horns had never been tighter, the additions of Goldxilla and Brent to the classic line-up added an extra layer of pounding rhythms, and for one night everyone in the club time warped back to an exciting time in Portland club history for one more night .  We will miss Berbati’s Pan it was our home for cheap nba jerseys many years and was the spot where we laughed, fought, played, imbibed, and sadly said goodbye.  Long live Berbati’s Pan may it’s 1000 legacy live on.

2. We played with Mahmoud Ahmed

For the second year in a row we opened for Living Legend of Ethiopian Music, Mahmoud Ahmed on January 1st.  There are very few performers in the entire world that can sing and put TezetaLand on a show like Mahmoud.  Just as he did last year, Mahmoud did not disappoint, playing until 2:30 in the morning and keeping the crowd chanting and dancing until they had to go home.  Once again we had wholesale nba jerseys the honor and privilege of joining him onstage for a rendition of Ne Entry Denun Tenesh.  We are still buzzing from this, it stands as one of our greatest moments onstage. Thanks to Yonas Yilma and the staff at Sengatera for putting this together.  Also big respect goes out to Tres Shannon for bringing back Mahmoud to the world’s greatest birthday party.  Mississippi Records recorded the show so look for a possible release in the future.

3. We are thankful for you

Thanks for supporting Tezeta Band in 2010.  We have had many highlights this year including the Sengatera Sessions, Mississippi Studios with Yogoman Burning Band, Doug Fir with Supersonic Soul Pimps, Slabtown with The Satin Chaps & the release of our first self-titled EP.  It was a great year and we owe it all to you, our friends who showed up to Tezeta  Band events and got the word out wholesale nba jerseys about our shows.  Look for more Announcing exciting events this year and maybe even a full length CD as well.

So what is up next?

Our first wholesale nfl jerseys full length show of the year is Coming Saturday January 29th at The Woods in Sellwood .  This is our third appearance at The Woods and this time the garage-soul of Brownish Black (will open up the night with special guest DJ E3.

Here is the necessary info cut, paste & pass it along if you desire.

Tickets can be purchased online at www.brownpapertickets.com/event/143343 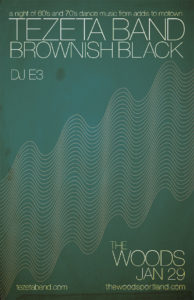 So keep in touch tezetaband.com is alive and well and up for your viewing pleasure.  Hit this page for our club calendar, and mp3s.  If you enjoy a more immediate source of news join our Facebook Page for regular updates and information. We are also represented on Twitter and MySpace.

Thanks and See you soon.